A Decade in the Making: The Evolution of Rentsync (formerly Landlord Web Solutions)

As many of you already know, Rentsync, formerly Landlord Web Solutions, had a very different look and feel not too long ago. In fact, the history of Rentsync had very humble beginnings.

Rentsync (formerly Landlord Web Solutions) launched in 2010, after its Co-founder and President, Jason Leonard spent time working in the multifamily industry and noticed the inefficiencies that existed between landlords and suppliers when it came to marketing and advertising. As he watched how difficult it was for landlords to create websites that were effective and reasonably priced, and as ad platforms struggled with getting up to date listing info from clients, a lightbulb went off. Shortly after, Jason met with David Koski, Co-founder and VP of Services, and Michael Mottola, Co-founder and VP of Product and Technology, to build one platform that could solve these issues and more.

Since its early days, Rentsync (formerly Landlord Web Solutions) steadily grew its products and services, listening intently to client needs and creating solutions that filled gaps in the marketplace. Today, Rentsync now powers over 20,000 properties on its platform, generates over 5 million leads annually, handles thousands of digital advertising campaigns for multifamily properties, and has a partner ecosystem of 25 plus. Notably, this three-man team has grown to over 50 employees, and ranked No. 94 on the Canadian 2019 Growth 500 list.

As the company travelled down memory lane for its 10 year anniversary, we stumbled upon some key milestones in the company's history. The image below highlights some of those and includes the growth of its products, services, and its team over the last 10 years. 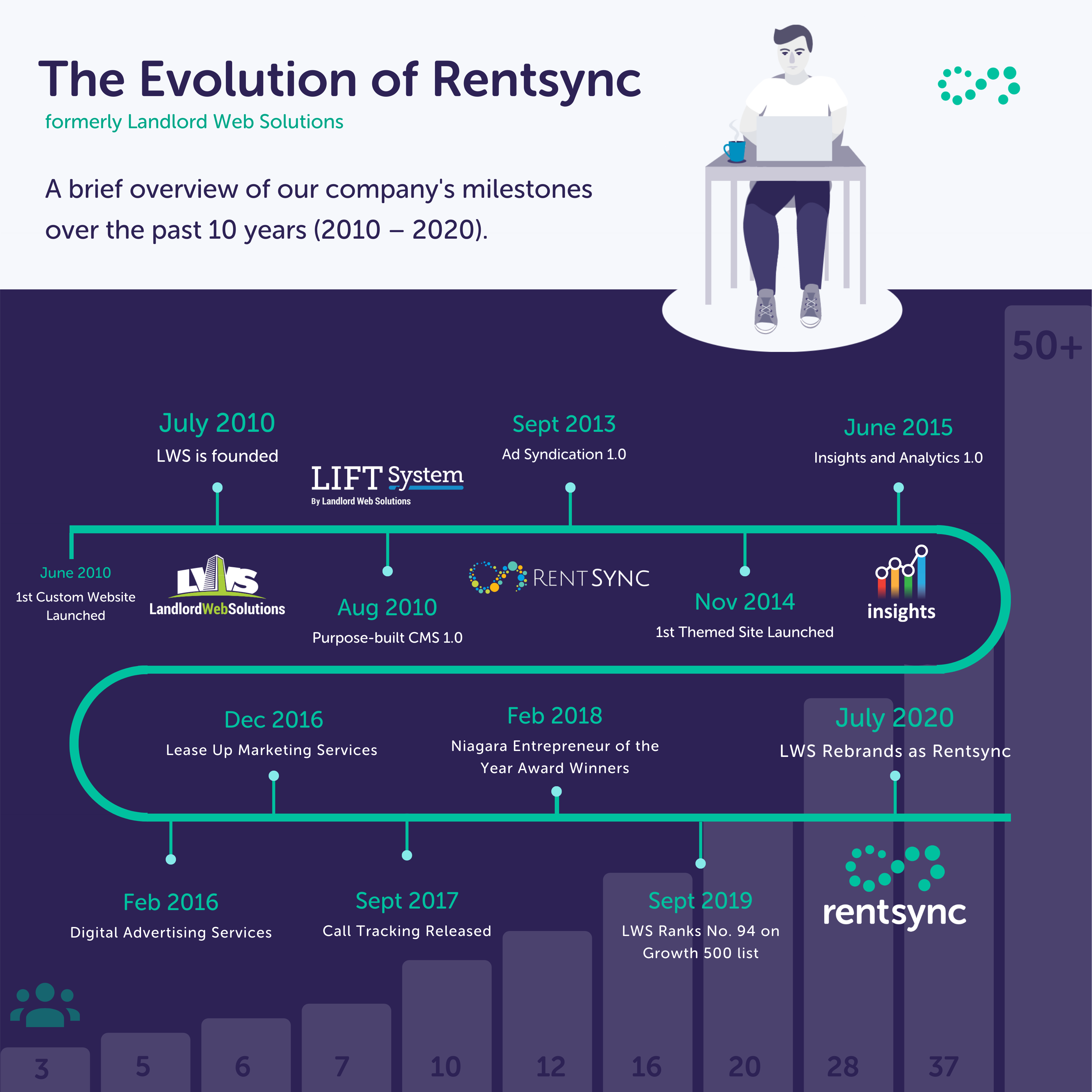 It's been a great decade for the Rentsync team, and there are already more milestones in the pipeline to look forward to.

If you're interested in hearing the full Rentsync origin story – click on the player below. In this episode of "Sync or Swim" the entire Rentsync leadership team chatted with the show's host, Mitch Fanning, about their past 10 years together, and their plans for the future.

If you liked what you heard, be sure to subscribe to Sync or Swim on Apple Podcasts and Spotify to get notified about new episodes and exclusive bonus content!

Rental Market Update No. 10: The Current State of Multifamily in North America

A Decade in the Making: The Evolution of Rentsync (formerly Landlord Web Solutions)

Introducing "Sync or Swim" a new podcast by Rentsync

Rentsync collects cookie data to provide a better user experience, but we offer you choices regarding how we and our third party providers collect and use the cookie data.

We use cookies to optimize your experience on our website. If you continue, we will assume that you accept to receive our cookies. However, if you change your mind, you can change your cookie settings at any time. Learn more, including how to manage the cookie settings.